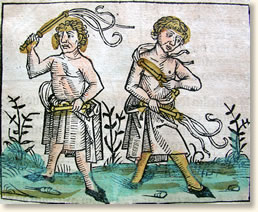 Some years ago I found myself working in an assortment of breweries over in Australia. One of these was a curious and ramshackle operation in a far flung corner of rural Victoria. The owner, my client, was a go-getting sort of fellow. He was smart, but in that limited way of the intelligent person who never got round to reading a few books and whose frame of reference was therefore somewhat limited. But he believed in getting his money’s worth from me and was forever asking whatever questions happened to drift across his mind. One of these concerned a substance known as isinglass. There was a large package of it in the brewery store cupboard, well past its sell-by date and long overdue to be thrown out. My client was curious about it and knew that at some point in the past this substance had been trialled in the conditioning tanks but then forgotten about.

I’d explained its function to him and assured him that I wasn’t keen to use it. I thought no more about it but clearly the subject had taken his fancy and he’d looked it up. A few days later he followed up on the matter, concerned that the use of isinglass at some unspecified point in the future would jeopardise the product’s appeal to what he described as ‘The Vegan Market’.

He was looking at me expectantly. I was clearly required to answer this patently foolish question. I quickly ran through a brief summary of veganism in my head, trying to put together a full and final answer for him. I pondered the unlikely idea of vegans buying and enjoying beer, concluded that he’d never actually met a vegan, (Rural Victoria remember?) and then tried to work out how to explain the motives of those who deliberately choose life’s minimum wage for themselves, taking in a look at the flagellants and hair shirt wearers of history. I considered the importance of making a clear distinction between the simple dietary choice of Vegetarianism and the far more serious social statement implied by Veganism.

Then I remembered that I was talking to an Australian and wisely decided to keep things simple.

And there the matter rested.

But I was reminded of this a couple of days ago when an off hand remark of mine on a local Facebook page regarding the importance of letting vegans starve as it wasn’t good to encourage them drew a seriously clenched up response from a person who concluded that I ‘wasn’t a very nice person’, (Which is no less than the truth) and that we would probably ‘Not Get On’ (Like I give a damn.)

I confess that I have an overwhelming urge to mock and belittle vegans. If I owned a restaurant I’d add a note to the bottom of the menu saying; “Yes! We have a Vegan Option’! It’s called The Front Lawn. Fill your boots Hay-Breath.”

Why do I behave this way? Aside from the whole ‘Not Really Being A Very Nice Person’ stuff I mentioned earlier? Many would say that I should respect other people’s choices in life and not be so judgemental of those who opt to eat nothing but potato peelings and hedge trimmings. But then those people are, I feel, missing one of the main areas of appeal for the vegan lifestyle. Deep down, vegans WANT to be disliked. They dislike themselves after all, so the scorn of others is as sweet as honey to them. (Though not real honey obviously since its production involves the exploitation of bees.)

“Oh come now!” I hear you say. “That’s surely nonsense! Vegans are simply people with deeply held ethical positions on animal exploitation and a need to eat a healthy diet”.

Well, bear with me and I’ll explain why you are mistaken. Because what you are describing are vegetarians, who are entirely different. Vegetarians are no bother to cater for. I know, I was one for a whole decade. If you are holding a barbecue or dinner party then the inclusion of a vegetarian or two on the guest list is no problem at all. The rise in availability of delicious products such as Quorn and haloumi cheese has made it all entirely simple. Vegetarians stopped squatting on the moral high ground years ago. The fact that Hitler and his odious side-kick Himmler were both staunch steak-dodgers and the Dalai Lama isn’t has rather put paid to that flimsy notion and that’s just fine. The important point is that vegetarians do not challenge the basic give and take nature of hospitality. Vegans on the other hand, challenge it quite aggressively. That famous joke about ‘How do you know if someone is a vegan? Don’t worry, they’ll tell you.’ is quite true. Vegans revel in their outsider status and will take any opportunity to bore you shitless with it. Because they know that their strident dietary demands are what sets them apart from normal social interaction. They have suffered for their diet and now, should you be unlucky enough to get one of them a s a house guest, it’s YOUR TURN.

The health aspect is decidedly questionable. I am quite sure that there are some people who can survive on a vegan diet and even a few who may thrive. But I’ve met quite a few vegans in the last year or two and it was quite plain that for most of them the health stuff is not that vital. I met one young German couple recently who were hilarious examples of this. Both were extensively self mutilated and both smoked heavily. The male one in particular had the pallor of a corpse and looked like he’d shrivel up and burn if exposed to sunlight. Clearly neither of them were vegans for the health benefits.

I suppose it should come as no surprise that so many vegans one meets these days are German. Germany has always been a big player in the ‘Self-Harm for Sanctimonious Reasons’ business. They didn’t start the Flagellant movement in the 13th and 14th centuries, that was the Spanish and Italians, but they developed it in their usual rather gloomy and mechanical way until it became a vast undertaking with hordes of glum, penitent men marching about the countryside whipping themselves bloody and moaning loudly. They also spread plague, which some people found a bit annoying.The important thing about this self flagellation was not just that you did it but that as many people as possible got to SEE you do it. The same is true of veganism. What’s the point of going to all the misery of a fun-free diet if you can’t go about shoving that misery under people’s noses?

So while it is tempting to simply write vegans off as half witted toddlers refusing any food they find ‘yuckky’, it is more interesting to look deeper into what makes people wish to go to such sad extremes in the cause of public suffering. In its most developed form we can witness the appalling self mutilation of Phillipinos each Easter, nailing themselves to crosses to prove something or other which I for one can’t be arsed to investigate. Devout sects in Italy do similar stuff as do Shiite Muslims in Iran and Catholics in New Mexico. The important thing to realise is that this pain is in no way hedonistic. These are not Peter Plomley-Walker style shenanigans involving riding crops, stern women in corsets and safe words. This is not meant to be fun and it clearly isn’t. It’s about genuine suffering, inflicted to strengthen resolve and define one’s imagined purity and singleness of purpose. These examples are all religiously driven of course, humans are always at their worst when doing nasty stuff that they imagine will make their ugly, bad tempered Gods happy.

But the dour and self denying lifestyle is not confined to those who imagine gods for themselves. Our increasingly secular world still has to provide outlets for expression among those for whom less is MORE. The stern, the unbending, the neo-puritans and the anti fun types.

I dislike these people. They annoy me and I want to annoy them. Which I clearly do.

The dissident feminist writer and academic Camille Paglia, who had already won my admiration for declaring that she cherished “performance, artifice and play rather than earnestness.” then went on to win it even further by predicting, quite accurately in my view, that this century would be defined less by the oppositions of gender, politics and faith and more primally by the opposition of the followers of Apollo and those of Dionysus. Which is pretty much what I see from where I’m sitting, (which is above a brewery, overlooking a vineyard and pondering the new drink driving laws….)

If you don’t quite get the classical allusion to all of this then look it up. That’s what Google is there for.

So if we must choose between those two vastly different sons of Zeus, then I’m with Dionysus all the way. It’s fun, frolics and great big meals with ALL the trimmings for me thank you very much. And if you are of a different view then you go for it. But don’t expect me not to mock you mercilessly. I’m only human.